Largest order to date for the all-electric aircraft announced.

Bye Aerospace announced an order for 30 all-electric Sun Flyer 2 airplanes from the Aspen Flying Club (the largest order to date for the all-electric aircraft that first flew in April), and provided prices for both variants. The battery-powered Sun Flyer seeks to disrupt the flight training market, and has a bit of drone in its DNA. 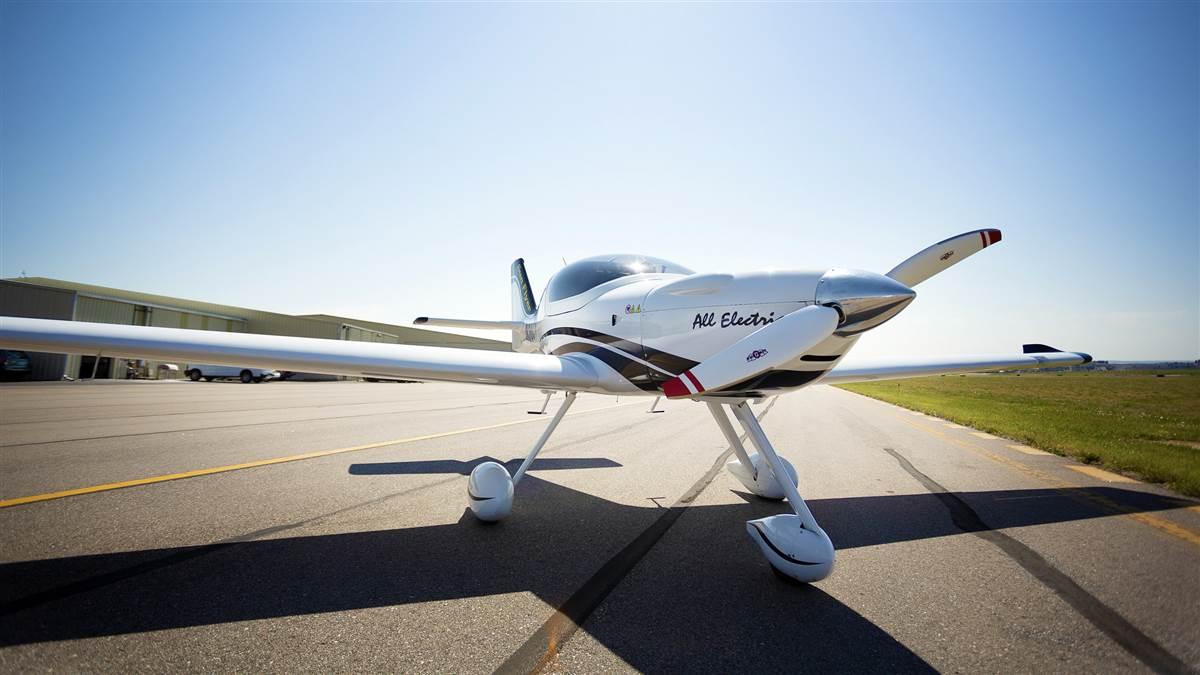 Bye Aerospace hopes to certify the all-electric Sun Flyer 2 in 2020, followed by a four-seat version in 2021.

The two-seat Sun Flyer 2 made its first test flight in April, and has attracted both investment dollars and orders from around the world—more than 100 aircraft orders had been booked before the Aspen Flying Club deal announced Aug. 13. The company hopes to be the first to earn an FAA type certificate for an all-electric aircraft, and has begun developing a four-seat version, the Sun Flyer 4.

The Colorado firm founded by CEO George Bye is also working with industry partners to develop unmanned electric aircraft for government and military applications, and Bye said in an email that those efforts are mutually supportive. Bye worked with Silent Falcon UAS Technologies on the eponymous Silent Falcon solar electric drone, a lightweight, portable system that entered service in 2015, and the development of which supported both the Sun Flyer models (two-seat and four-seat versions), and a larger solar-electric unmanned aircraft called StratoAirNet, a proof of concept with a 15-meter wing.

“The development of StratoAirNet has indeed helped bring Sun Flyer to market,” Bye said in an email. “The propulsion system and battery packs all share similar or somewhat similar designs for both aircraft types—appropriately scaled. The small-scale Silent Falcon development helped the StratoAirNet. Sun Flyer and StratoAirNet were designed with lessons learned from both programs.”
This is far from the only example of manned aircraft designers using unmanned programs to accelerate development. Terrafugia, the Massachusetts firm founded to bring road-worthy aircraft to the masses, began using unmanned models to test the aerodynamics of the TF-X in 2015. Other manufacturers have also used unmanned scale models for prototype development. As Bye noted, the benefits of developing unmanned variants, including system performance data, extend beyond aerodynamics in the case of Sun Flyer, which the company expects to certify first in its two-seat form in 2020, followed by the four-seat Sun Flyer 4 in 2021.   Bye is also working with XTI Aircraft on the Tri-Fan 600 vertical takeoff and landing design that seats six and is among a fast-growing list of contenders for the future electric air taxi and business transportation markets.

The Sun Flyer 2 is currently priced at $289,900 (2018 dollars, excluding options), and the four-seat version is priced at $389,000 (excluding options). Senior Vice President Diane Simard, who provided the price information, said the company will soon announce avionics options.  Eliminating the fuel tanks gives the Sun Flyer an edge in speed and reduces required thrust compared to traditional training aircraft.  The Sun Flyer 2, powered by a 90-kilowatt (115 horsepower) Siemens motor will have a “full fuel payload” (battery weight does not change during discharge) comparable to a Cessna 172, 440 pounds compared to the Cessna’s 450 pounds; a higher top speed of 138 knots (compared to 122 knots); and a significantly higher lift-to-drag ratio of 20.6, compared to the Skyhawk’s 9.1. (Comparison data was provided by Bye Aerospace in an email.) The company noted in 2016 that the Sun Flyer’s solar cells will help extend its flight endurance to three hours on a single charge. The company estimated in a recent email exchange that charging the batteries will cost $3 per flight hour.

Aspen Flying Club, based near the Bye Aerospace facilities at Centennial Airport, south of Denver, plans to build an electric aircraft fleet, starting with the 30 Sun Flyer 2 models reserved as certification testing continues. The club currently operates a rental fleet of nearly 40 aircraft, and is part of the American Flight Schools family.

https://www.aopa.org
Editor-Web
Jim Moore joined AOPA in 2011 and is an instrument-rated private pilot, as well as a certificated remote pilot, who enjoys competition aerobatics and flying drones.